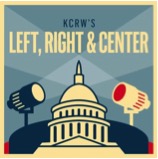 Hosted by Josh Barro, Katrina vanden Heuvel and Rich Lowry, New Installments of Witty and Engaging Radio Show and Podcast Airs Fridays at 2:30 PM and 7:00 PM On KCRW
And Over 30 Stations Nationwide

Praised by both sides of the aisle for its provocative and compelling exchange about politics, policy and popular culture, KCRW’s weekly program, airing Fridays at 2:30 and 7:00 pm PT, (and available for download from iTunes, kcrw.com and more) is moderated by Business Insider senior editor and MSNBC contributor Josh Barro, and features The Nation’s Katrina vanden Heuvel on behalf of the left, and National Review editor in chief Rich Lowry commenting on behalf of the right.

On the decision to expand the show to a full hour, Scott said: “Political discourse is at a low point. Talking heads are preying on this divide. This makes KCRW’s Left, Right & Center more important than ever. Few places are committed to reasoned discussion and real listening by all sides. LRC is one of KCRW’s most popular shows, on air and as a podcast, which shows that now is the time to double our efforts – and the time we spend – on this critical exchange.” He added: “After hitting an all-time high of almost one million podcast downloads last May, we knew this was a conversation that required more air time. Thanks to Josh, Katrina and Rich for continuing to encourage the kind of refreshing conversation that is sorely needed in today’s exhausting news cycle.”

Since its launch in 1996, party pundits and all-star journalists from every angle of the political spectrum have participated in what has been touted as an honest and thoughtful antidote to the self-contained opinion bubbles that dominate the political debate. Most recently, the podcast was acknowledged for its revelations without the rhetoric during Samantha Bee’s memorable Not The White House Correspondents’ Dinner monologue.

Katrina vanden Heuvel noted: “I believe that intelligent political commentary demands independent thinking. In an age when journalism seems more defined by partisanship, I welcome being part of Left, Right & Center, a show that seeks complexity not certainty. And at a time when we see a coarsening of language and a vilification of those whose ideas aren’t a match with our own, the show provides a forum for airing substantive disagreements in a bold, meaningful way and with a respect that is often lacking in our media today.”

Lowry said: “At a time of poisonous incivility in our public life, Left, Right & Center provides a platform for sharp but civil disagreement, where substance trumps rhetoric and persuasion is more important than denunciation. The program is an oasis where ideas still matter and differences over them are aired fully, sincerely–and respectfully. Bombast need not apply.”

Barro added: “American politics has gotten more polarized and weirder than ever before in my life. It feels like both sides are talking past each other. We like to say our show provides a ‘civilized yet provocative’ forum to share ideas across the political spectrum, engaging without sniping. Such engagement is increasingly rare, yet more important than ever. So we’re going to provide more of it.”

Airing on over 30 public radio stations across the country (check local listings) and available for download at iTunes, KCRW.com and more, Left, Right & Center, has been a touchstone for listeners seeking a robust conversation about topics ranging from the Russia investigation, immigration and the secrecy of the healthcare bill to James Comey’s testimony and more recently the shooting at the Congressional baseball practice in DC. A rotating list of luminaries and special guests featured in recent weeks includes Keli Goff, Gene Sperling, Christopher Ingraham, Molly Ball, Mickey Kaus, Juliette Kayyem, and more.

This month, the program added a new segment, It’s Been Busy, exploring topics that often get lost in the world of Trump headlines. Whether it’s delving into issues like opioids that kill more Americans each year than the HIV epidemic at its height or an update of the aggressive backroom effort to repeal Obamacare, the program dissects and analyzes possible solutions that prove elusive to policy makers and seeks substantive answers versus the scandal and sensationalism that pervades our cultural landscape. Left, Right & Center’s popular Rants segment will continue to provide a political soapbox for the hosts and weekly guests giving them 30 seconds to share their very personal issue-specific points of view without interruption or condescension from the opposition.

ABOUT KCRW
KCRW creates and curates a unique mix of content centered around music discovery, NPR news, cultural exploration and informed public affairs. KCRW is driven by the spirit of Los Angeles and delivers in innovative ways – on the radio, digitally and in person – to diverse, curious communities around the corner and around the world.  A community service of Santa Monica College, KCRW can be found on the air in Los Angeles, Santa Barbara, Ventura, Mojave, Palm Springs, San Luis Obispo and via KCRW-developed smartphone apps and online at KCRW.com.