SANTA MONICA, Ca. — KCRW (89.9FM and kcrw.com) is pleased to announce Gustavo Arellano as our newest weekly contributor to the station. Arellano has been a frequent guest on KCRW’s Good Food for over seven years. Now, in his new role, drawing on his work as Editor of the OC Weekly, Gustavo will offer his insight into the stories shaping Orange County.

“KCRW was looking for someone who could shine a bright light on this sprawling, diverse and vitally important region of Southern California, and we are happy to have Gustavo as a guide,” says Gary Scott, news program director at KCRW. “Gustavo is smart, he’s dogged, he’s funny … and he’s occasionally outrageous — but he’s more passionate and plugged in than just about anyone you’ll ever meet.”

“Orange County is virtually virgin territory in the Southern California media landscape, and my colleagues at the OC Weekly and I have been a lone voice in the wilderness proclaiming its glories and controversies for years,” said Gustavo Arellano. “I’m thrilled that KCRW has assigned me to be their guide to this strange land, especially after having collaborated with them for years on Good Food.”

Arellano is the editor of OC Weekly, an alternative weekly newspaper in Orange County, CA, and the author of  a nationally syndicated column “¡Ask a Mexican!”, in which he answers any and all questions about America’s largest minority community. The column has a weekly circulation of over 2 million in 39 newspapers across the United States and won the 2006 and 2008 Association of Alternative Weeklies award for best column.

Gustavo is the author of two books, Orange County: A Personal History, and, most recently, Taco USA: How Mexican Food Conquered America. He is a lecturer with the Chicana and Chicano Studies department at California State University, Fullerton.

For more information about KCRW and its programming, please visit www.kcrw.com.

About Gustavo Arellano
Gustavo Arellano is the editor of OC Weekly, an alternative newspaper in Orange County, California, author of Orange County: A Personal History and Taco USA: How Mexican Food Conquered America, and lecturer with the Chicana and Chicano Studies department at California State University, Fullerton. He writes “¡Ask a Mexican!,” a nationally syndicated column in which he answers any and all questions about America’s spiciest and largest minority. The column has a weekly circulation of over 2 million in 39 newspapers across the United States, won the 2006 and 2008 Association of Alternative Weeklies award for Best Column, and was published in book form by Scribner Press in May 2007. Arellano has been the subject of press coverage in national and international newspapers, The Today Show, Hannity, Nightline, Good Morning America, and The Colbert Report, and his commentaries regularly appear on Marketplace and the Los Angeles Times. Gustavo is the recipient of the Los Angeles Press Club’s 2007 President’s Award and an Impacto Award from the National Hispanic Media Coalition, and was recognized by the California Latino Legislative Caucus with a 2008 Spirit Award for his “exceptional vision, creativity, and work ethic.” Gustavo is a lifelong resident of Orange County and is the proud son of two Mexican immigrants, one whom was illegal. 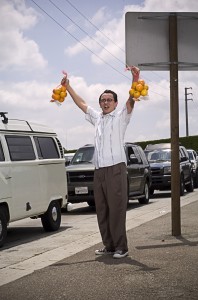