KCRW Announces Anne Litt as Next
Program Director of Music

“I’m thrilled to have Anne Litt as the new Program Director of Music. Anne has been finding and cultivating talent inside and outside KCRW for years. She’s primed to move KCRW and our signature music programming into the next era,” says KCRW President, Jennifer Ferro. “Anne joins Paul and Drew to round out KCRW’s new content leadership team. Along with our incredible staff, we are positioned to focus squarely on the station’s future and deliver excellence across all of our platforms – in music and talk programming – through a wide range of personalities that have made KCRW such a beloved institution.”

“After 20 years on the air at KCRW, having the opportunity to map out our future in this leadership role, at the station I’ve known, respected and valued above all others, is the honor of a lifetime,” stated Litt. “This is a pivotal moment for KCRW to redefine the meaning of ‘radio’ in the 21st century.”

The search for the next host of the station’s flagship music show, Morning Becomes Eclectic will now intensify. Details of the MBE host position will be posted here in the coming days. Litt will host MBE until the position is filled.

ANNE LITT
Growing up in Richmond, VA, Anne Litt became a lifelong radio fan. Her first on-air experience was in 1986, at the forefront of the alt-rock revolution, at the University of North Carolina, Chapel Hill’s award-winning radio station, WXYC. After graduating from UNC in 1988, she joined the pioneering independent label, Mammoth Records, and was instrumental in guiding the careers of such seminal alternative stars as Juliana Hatfield, the Blake Babies, and The Sidewinders. In 1991, Litt moved to Los Angeles to explore her obsession with the SoCal music scene, and continue her career in – and be at the epicenter of – the music industry. In 1996, she started her dream job as a DJ for KCRW working various shifts until 2000 when she was tapped to host the weekend afternoon show. Litt’s signature mix of progressive pop, global rhythms and modern sounds fit right into the KCRW aesthetic, which was nationally recognized as one of the most eclectic, adventurous radio stations in the country. During her KCRW tenure, Litt has hosted countless music events including KCRW’s World Festival at the Hollywood Bowl, First Fridays at the Museum of Natural History and KCRW’s Summer Nights. She has emceed showcases at SXSW and Sundance Film Festivals and interviewed dozens (if not hundreds) of musicians including: Beck, Yola, Nick Waterhouse, Gary Clark Jr., Patti Smith, Ty Segall, The National, Margo Price, Norah Jones, Tom Jones, Trombone Shorty, and Spoon, to name a few. In addition to helping launch the careers of countless developing artists, Litt has also been instrumental in ushering in the next generation of stellar DJs. Litt is also an accomplished music supervisor with credits that include the Grammy-nominated soundtrack for the Oscar-winning film “Little Miss Sunshine,” and campaigns for Apple, Volkswagen, and Acura. Notably, Litt placed the music in all six spots of the NBA’s legendary “There’s Only One” split-screen campaign featuring ahead-of-the-curve artists, and the unprecedented commercial use of a song by Radiohead. Litt lives in Hollywood with her husband and son. She serves on the Board of Directors for The Pablove Foundation, an organization that helps kids with cancer live a love-filled life today, and a cancer-free life tomorrow. She knows of no activity more satisfying, in this world, than discovering and sharing new music — unless it’s sailing or skiing with her son… or perhaps that time Josh Groban wrote a song about her.

PAUL BENNUN
Paul Bennun is an executive with several decades experience working creatively and strategically at the junction of content and technology. Throughout his professional life, he has been a leading practitioner and thinker in radio, audio, and interactive entertainment. Co-founder of the UK’s largest radio production company, Somethin’ Else, as Chief Creative Officer he led the organization to become the BBC’s primary supplier of independently-made radio, including many of the Corporation’s most important properties across spoken word and music. Somethin’ Else was also the leading provider of outsourced social media, interactive content and video games to the BBC. In 2013 and 2015, Somethin’ Else received BAFTA’s “Production Company of the Year” award for its work across radio, TV and games. Paul started working in radio at the age of 13 in his hometown of Exeter, eventually presenting shows, and acting as the weekend traffic reporter at age 15 on Devonair, the local independent radio station. He then became a producer on various London radio stations while completing his undergraduate degree. On founding Somethin’ Else, Paul immediately started exploring the junction of sound and interactive media, directing the UK version of a legendary game called You Don’t Know Jack, which received two BAFTA nominations in 1998, the same year he received a Sony Radio Academy Award for his first series for the BBC (a two-part show about the history of funk music). During this period he co-authored a UK government report on the future of music and podcasting, became a board advisor to the BBC and the UK’s advertising industry, and presented radio shows for the BBC. On moving to the U.S.A. in 2016, Paul founded a data-driven social storytelling company, Storyblaster. He is also on the board of the Metabrainz Foundation, the music industry’s leading provider of open-sourced music metadata, powering Spotify, Amazon and most other major streaming music providers. Paul lives in Los Feliz, is a bread baker, loves to cook and owns two Shiba Inus.

DREW TEWKSBURY
Drew Tewksbury is a L.A.-based journalist, editor, and multimedia producer. As an editor at the Los Angeles Times, Tewksbury helmed coverage in the arts and books sections, where he spearheaded literary criticism and steered coverage of L.A.’s diverse creative communities. In 2018, Tewksbury was the contributing editor at GOOD Media, where he built a team of international freelancers to highlight innovators, report on global culture, and showcase inspiring people who are working to improve the world. Previously, Tewksbury was the managing editor of LA Weekly before the publication’s sale in 2017, where he oversaw the section editors, edited long-form cover stories, developed special issues, and spearheaded video production, which earned him and his team an Association of Alternative Newsmedia award for Documentary Profiles. From 2012-2016, Tewksbury was the managing editor/producer for KCETLink’s Artbound, an online arts journalism publication and Emmy-winning television show providing in-depth arts & culture coverage across Southern California. He also assisted in the development of article-based documentary videos, as part of Artbound’s Emmy-winning TV show which aired on KCETLink public media. In addition, he helped produce the live music performance show Artbound Presents: Studio A. An accomplished journalist, Tewksbury has written and reported feature articles or radio pieces for: National Public Radio (NPR), Time, Los Angeles Times, Los Angeles Magazine, L.A Weekly, KPCC, NME (U.K), Billboard, The Hollywood Reporter, Flaunt, and SWINDLE Magazine, among other publications. Tewksbury wrote and voiced regular on-air music review segments, “New Music Tuesday,” for Southern California Public Radio’s Take Two and the Madeleine Brand Show. As an educator, Tewksbury has taught Entertainment Journalism at the University of Southern California’s Annenberg School for Communication and Journalism, where he went to graduate school. He has also taught Cultural Journalism at Loyola Marymount University. Tewksbury lives in the foothills of Echo Park — where ghostly coyotes roam at dusk and fireworks light up the summer sky — and spends too much time at the Cactus Store. He is a Gemini.

About KCRW
KCRW creates and curates a unique mix of content centered around music discovery, NPR news, cultural exploration and informed public affairs. We are driven by the spirit of LA and deliver in innovative ways — on the radio, digitally and in person — to diverse, curious communities around the corner and around the world. A community service of Santa Monica College, KCRW can be found on the air in LA, Santa Barbara, Ventura, Mojave, Palm Springs, San Luis Obispo, Berlin, Germany, and worldwide via the KCRW-developed smart phone app, or online at kcrw.com. 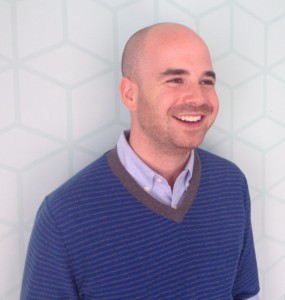 LOS ANGELES, CA (May 20, 2014) — KCRW announced today it has hired Micah Greenberg to serve as Director of Business Development, where he will oversee the strategy and implementation of expanding KCRW’s audience and revenue streams across partnerships, underwriting, membership, and event sponsorship.  In addition, Greenberg will work with KCRW President Jennifer Ferro—as well as the programming, marketing, and underwriting teams—to explore new areas of growth, as the station continues to increase its revenue, reach and impact.

“It is our great pleasure to welcome Micah Greenberg to the senior leadership team.  His extensive experience in public media will be invaluable as we continue to diversify KCRW’s offerings and grow our audience in this rapidly changing media landscape,” said Jennifer Ferro, KCRW General Manager and KCRW Foundation President.

ABOUT KCRW
KCRW creates and curates a unique mix of content centered around music discovery, NPR news, cultural exploration and informed public affairs. KCRW is driven by the spirit of Los Angeles and delivers in innovative ways — on the radio, digitally and in person — to diverse, curious communities around the corner and around the world.  A community service of Santa Monica College, KCRW can be found on the air in Los Angeles, Santa Barbara, Ventura, Mojave, Palm Springs, and via five KCRW-developed smartphone apps and online at KCRW.com.

KCRW announced today it has brought aboard Andrew Walsh, Jolie Myers, Jenny Hamel, and Ben Gottlieb to the station’s team of news producers.

“Talented producers are at the heart of what we do everyday at KCRW. By creating original programs that cover the arts, culture, politics and technology, we strive to give our listeners a better understanding of their world.  We’re also preparing to launch our first daily program since 2001 with Madeleine Brand, and that means building a top-notch team,” said Gary Scott, program director for KCRW.

Jolie Myers will join as a producer on the new show, along with seasoned KCRW producers Christian Bordal and Anna Scott, who previously worked on Which Way, L.A.? and To the Point, and Matt Holzman, co-creator of The Business and KCRW veteran.  Myers brings experience in radio production, photojournalism, and web journalism, most recently working as associate producer on Marketplace’s Wealth and Poverty Desk.

About KCRW
KCRW, a community service of Santa Monica College, is one of the nation’s leading National Public Radio (NPR) affiliates, also featuring an eclectic mix of originally-produced and nationally-distributed news, music, talk and arts programming.  The terrestrial signal serves Los Angeles, Orange, Riverside and Ventura counties, as well as parts of San Diego, San Bernardino, Kern, and Santa Barbara counties and the greater Palm Springs area. KCRW’s programming is available worldwide, both live and on-demand, at KCRW.com, and through its smartphone apps (iPhone, Android, and Blackberry).