SANTA MONICA, CA, June 21, 2012 – KCRW (89.9FM and KCRW.com) is pleased to announce the launch of the KCRW Music Mine app for Spotify. The first US radio station to take its music offering straight from the airwaves to the Spotify Platform, the app is now available for installation from within the Spotify desktop client.

From quick discovery to deep exploration, the app takes listeners on an audio adventure of artists handpicked by tastemakers at the LA public radio station. The app is modeled after KCRW’s critically-acclaimed iPad app, also called Music Mine, launched last fall.

KCRW Music Mine for Spotify displays up to 100 tracks at a time, handpicked by the station’s world famous DJ staff, and updated daily in tandem with our on air playlists. This special format enables time-crunched users to create their own listening experience by streaming KCRW playlists and adding them to their own collection to revisit in the future. Explore Spotify’s offering from artists that have the KCRW stamp of approval without being overwhelmed by options.

“Spotify’s musical offerings are tremendous and as music consumers adapt this technology into their listening habit, KCRW will be right there offering a curated list of the best music from around the world,” said Director of New Media for KCRW Anil Dewan.

KCRW Music Mine for Spotify is the latest in the station’s continuing effort to bring the Music Mine technology to additional platforms. Over the past several months, KCRW has implemented several technologically progressive initiatives which allow listeners more freedom to chose how to consume the station’s content.

Last week, the station announced the launch of their HD-2 channel which will broadcast Eclectic24, KCRW’s 24-hour music channel. In January, KCRW became one of the first public stations to simulcast music and news streams on iHeartRadio.

For more information on KCRW Music Mine please visit: www.kcrw.com/musicmine 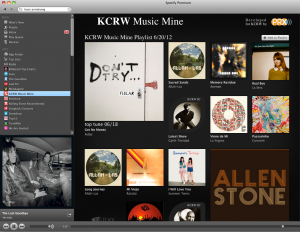 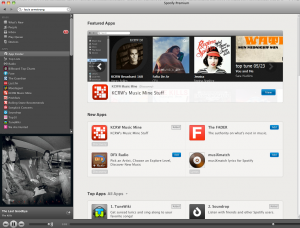